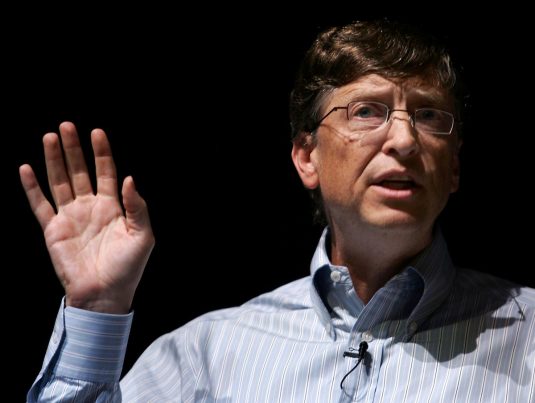 When most people hear the name “Bill Gates,” they think of Microsoft and the Gates Foundation. However, the not-so-hidden agenda that lies behind the Gates Foundation is often glossed over, especially by the mainstream media. Gates and his foundation have consistently come under fire for their aspirations of depopulation, and now the same man who essentially has made it a goal to eliminate humans is lecturing the rest of us about bioterrorism?

Recently, the UK’s Daily Mail reported that Bill Gates believes a biological terror attack is on the horizon, and that it could take out some 30 million people in the blink of an eye. According to Gates, biotechnology has grown so advanced that bio-warfare could easily become more lethal than a nuclear strike. As an example, he stated that terrorists could bring new life to a disease like smallpox — which is a deadly pathogen that almost no one has immunity for at this point in time.

Gates echoed similar sentiments in Munich earlier this year, where he told world leaders that a pandemic could end millions of lives, and declared that it was a distinct possibility within the next 10 or 15 years.

As per the Daily Mail, Gates said, “When you are thinking about things that could cause in excess of 10 million deaths, even something tragic like a nuclear weapons incident wouldn’t get to that level. So the greatest risk is from a natural epidemic or an intentionally caused infection bioterrorism events.”

“Whether the next epidemic is unleashed by a quirk of nature or the hand of terrorist, scientists say a fast-moving airborne pathogen could kill more than 30 million people in less than a year. So the world does need to think about this,” he reportedly added.

“It seems incredibly ironic that Bill Gates, the man who deliberate seeks to eliminate billions of humans from the planet, is concerned that bioterrorism might kill 30 million more,” replied science innovator Mike Adams, who founded and runs an environmental science lab known as CWC Labs. “The most likely vector that will be chosen by globalists for rapid human depopulation is the release of a deadly, weaponized viral strain for the simple reason that it spreads on its own and can’t be tracked back to any particular origin,” Adams warned.

The irony of Bill Gates’ faux concern for the human race is almost laughable. India, however, may not find it so funny. Earlier this year, India’s National Technical Advisory Group on Immunization announced that it would be ending their relationship with Gates Foundation after it was revealed that the vaccines the foundation had been promoting were doing irreparable harm to young Indian girls — and that the “campaigns” were actually trials of the vaccines. Natural News writer Ethan Huff reports that independent journalists have found that these vaccine trials in India led to thousands of injuries and deaths.

Previously, in 2015, reports also revealed that courts in India were launching lawsuits targeted at the Gates Foundation. The Supreme Courts of India began an investigation following revelations about the organization’s questionable actions abroad — such as the illicit testing of vaccines like Gardasil and Ceravix. These experiments were conducted on children, which only makes the situation even more disturbing.

Between the trials of Ceravix and Gardasil, some 30,000 children were experimented on. Many of these children were from rural areas in India, where even the parents were often illiterate and most likely not able to understand what they were consenting to. Reports say in many cases, the consent forms may have even been forged.

The Gates Foundation, along with the WHO and the Program for Appropriate Technology in Health, were condemned in a petition which claimed that the organizations were “criminally negligent” for taking advantage of “vulnerable, uneducated and under-informed population [of] school administrators, students and their parents who were not provided informed consent or advised of potential adverse effects.” It’s clear that these groups took advantage of these people and their children and used them as guinea pigs.

Bill Gates has also come under fire for his personal statements regarding his support of global depopulation efforts and the value of human life. Not only has he stated that it would be “good” if they could reduce the population of the earth by 10 or 15 percent, he also reportedly stated that we need to differentiate between people who are useful and worth keeping and those who provide society “no benefit whatsoever.”

Make no mistake, Bill Gates has little concern for human lives; he just cares about what he can use them for.