Nanoweapons may wipe out humanity before the end of the century, warns futurist 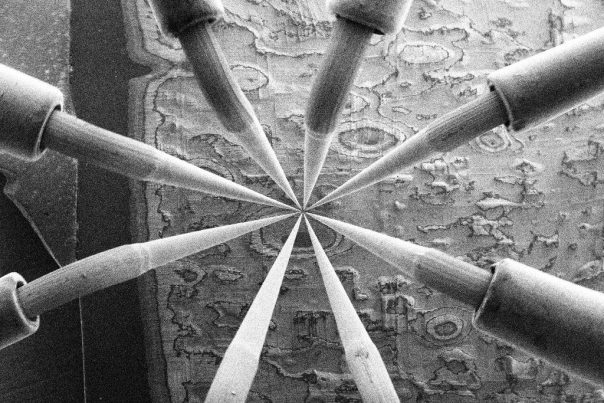 Today’s exploitation of nanotechnology may one day lead to the creation of mini-nuclear bombs and lethal robots the size of insects, according to Minnesota-based physicist and futurist Louis Del Monte. In his book entitled Nanoweapons: A Growing Threat To Humanity, Del Monte warns that current innovations in nanotechnology may potentially wipe out the entire human population by 2100.

With the U.S., China and Russia allegedly investing billions in nanoweapons research, Del Monte cautions that the development of nanobots – extremely small killing machines — pose the greatest threat in human existence as these high end robots can be used as weapons of mass destruction. Another alarming prediction: Del Monte claims terrorists may take hold of these nanoweapons through black market deals as early as the late 2020s.

“The events that most people consider likely to cause humanity’s extinction, such as a large asteroid impact or a super-volcanic eruption, actually have a relatively low probability of occurring, in the order of one in 50,000 or less. Obviously nanoweapons are at the top of the list, having a one in 20 chance of causing human extinction by the end of this century,” Del Monte stated.

Nanoweapons are much smaller than a strand of hair, Del Monte said. According to Del Monte, weapons such as insect-like nanobots can be programmed to perform a variety of unwanted attacks such as injecting toxins to people or contaminating a major city’s water supply. Nanodrones, on the other hand, can hover into a room and drop lethal chemicals onto something, such as food, to eliminate certain individuals, Del Monte added.

Furthermore, Del Monte discussed about the potential of nanotechnology in developing small-sized nukes with components so minute it makes detection difficult. Del Monte said such a weapon could be compact enough to be hidden in a pocket, but disastrous enough to unleash an explosion equivalent to about 100 tons of TNT.

While Del Monte says that his predictions may sound absurd, he maintains that a modern arms race is underway and that the superpowers of the future would be the countries most capable of developing these nanoweapons. (RELATED: Read more news about technology gone wrong at GLITCH.news)

Nanoweapons’ reality is getting closer by the minute

Several high-profile agencies have already made breakthroughs in nanobot development, which further establishes the case of a potential nanotechnology warfare in the future.

The Defense Advanced Research Projects Agency, for example, has developed an initiative last year called Fast Lightweight Autonomy program. This enabled an autonomous drone to infiltrate a building at a flight speed of 20 meter per second and avoid obstacles such as walls or objects without a remote pilot or outside communication. The drone carried a high-definition on board camera and sensors including sonar, LIDAR, and inertial measure units. The DARPA announced this breakthrough following tests at the Otis Air National Guard Base in Cape Cod, Massachusetts.

The Army Research Laboratory has also developed a nanodrone the size of a house fly. The project drone, which features tiny robotic legs, can be used to enter a building without being detected. This will enable users to conduct surveillance and accomplish other potentially lethal tasks.

The Pentagon’s Defense Threat Reduction Agency has also highlighted the potential of military nanotechnology in its 2010 report. According to the report, “transgenic insects could be developed to produce and deliver protein-based biological warfare agents, and be used offensively against targets in a foreign country.” The report has also warned of “microexplosives…[and]nanobots serving as [bioweapons] delivery systems or as micro-weapons themselves, and inhalable micro-particles to cripple personnel.”

In addition, a Cambridge University conference on global catastrophic risk determined a 5% risk that these nanoweapons will cause the extinction of humans before the year 2100.