Is the flu shot a globalist IQ test to eliminate stupid people from the gene pool? (satire podcast) 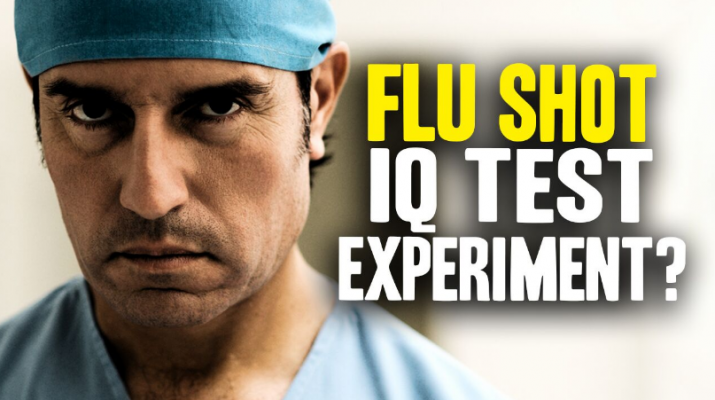 Put this one in your “evil globalist villain plots” file: Since the flu shot is the most widely-deployed vaccine containing high levels of mercury — a brain-damaging toxic heavy metal that also causes spontaneous abortions and infertility — is it possible that depopulation-pushing globalists are using flu shots as a national IQ test to eliminate stupid people from the human gene pool?

Consider the evil genius of the plot: First, we know that globalists like Bill Gates can’t wait to reduce human population using vaccines, and he’s the guy funding all the newest vaccine research. Next, we also know that vaccine zealots refuse to remove toxic mercury from flu shots. They demand it be kept in the formulation for some reason, even as mercury has been banned in vaccines in most other first world nations.

We also know that globalists think the masses are incredibly stupid and a scourge on the planet’s resources and thus they want the masses to be eliminated as quickly as possible.

Enter the FLU SHOT, the “final solution” for the globalists’ ultimate goal of “saving the planet” from humans. (Al Gore is jumping up and down with joy…)

To pull it off, the globalists simply tell people they desperately need this shot even though it’s medically useless, then get them to line up so they can be injected with their own brain-damaging, abortion-promoting heavy metals. (Yes, it’s so much easier for governments to pull off compared to corralling people into box cars at gunpoint…)

The globalists take special care to target pregnant women with mercury vaccines so they can cause spontaneous abortions, knowing full well that in some percentage of those pregnant women, if the babies survive, some of them will be born with autism caused by the vaccine.

This is called “medical culling” of the population, and it’s a self-selected target that only affects people who are too stupid to know they should never inject themselves with mercury.

As far as people like Bill Gates is concerned, it’s the perfect IQ test to weed out the human gene pool. Bottom line? If you’re stupid enough to get a flu shot instead of just taking some vitamin D (which actually works far better than a flu shot), the globalists probably don’t want you to participate in the future of the human gene pool.

That’s the evil villain plot theory, in any case. Hilariously, it probably is true that anyone stupid enough to get a flu shot is not intellectually qualified to represent humanity’s future… unless that future is ripped right out of Idiocracy. Perhaps on this subjects, the globalists may have a valid point.

Natural Selection (Darwinism) has long eliminated animals and humans who were too stupid to navigate reality, by the way. No longer present in the human gene pool include:

Now, it seems, we can add “people who inject themselves with mercury from flu shots” to that list of self-eliminating organisms.

Hear the full satire podcast at the Health Ranger Report website or listen below, and then check your own IQ and make sure you never voluntarily inject yourself with brain-damaging heavy metals: